Large-cap growth mutual funds generate some of the highest participation among financial instruments. These funds are professionally managed and generate profit primarily through the capital appreciation of growth stocks from more cyclical sectors, like Industrials, Consumer Discretionary, and Technology. Considering the average size of large growth funds, they typically have lower expense ratios - the operating expenses charged to the shareholders – when compared to other fund categories. However, expense ratios can vary considerably between funds. depending on their size and investment strategy.

Now that we’ve put the importance of expense ratios in its proper perspective, it is apropos to understand how fund performance and expense all come together to reflect which large growth funds offer the best value for investors. Accordingly, I wanted to examine the relationship between how large growth funds are ranked by the most esteemed investment research sites and the funds’ respective expense ratios. Luckily, USNews.com provides a rating that aggregates the rankings from the most popular investment research sites: Morningstar, CFRA, Lipper, The Street, and Zack’s. To analyze  the relevant data, , I web-scraped USNews to bring to light this relationship between large growth fund rankings and expense ratios.

The data I scraped was from USNews’ Money section which ranks the top 200+ of every type of investment vehicle. Given the fact that their rating is aggregated by multiple other sites, I found it to be the most valuable site to scrape since, by nature of its aggregation, the rating has a more all-encompassing assessment of each fund’s performance. Conveniently, USNews formats their rankings on a single, interactive page that can all be viewed at once, and the landing page for each fund’s description can be accessed right from the rankings page. The rankings page lists each fund’s name, expense ratio, and assets under management; each fund’s landing page provides more specific details of the fund’s expenses, risks, performance over time, and more. 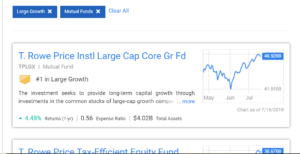 I managed to scrape the data of all 226 ranked large growth funds and an additional 70 unranked funds. Considering the interactivity of the USNews’ rankings page, I used the Selenium Suite to load and extract all of the rankings data. After scraping through the rankings page, with the href links I gathered there, I looped through each fund’s landing page to extract additional data. That plan fleshed out as follows:

1)      I scrolled down through the rankings page till the page’s pop-up showed. Once it showed, I stopped the scroll instruction, and clicked to close out the pop-up window.

3)      After loading all of the content, I scraped each fund’s name, expense ratio, total assets, and the corresponding href links for each of the fund’s landing pages.

4)      By grabbing all of the href links, I was able to use selenium to loop through my list of links to obtain each fund’s ticker symbol, expense profile, and risk profile. 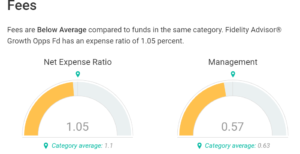 The total time it took me to scrape was just over an hour; the fact that only 300 funds were assessed made the scraping process fairly manageable. Since I needed to scrape the href links before I could access each fund’s landing page, I had to merge two csv files: one from the data I gathered on the ranking’s page, and the other from the data I gathered on the landing pages. Since I was able to scrape the name of the funds on both scrapes, I merged the two csv files on the fund name. Including the fund name, I was left with 7 columns.

Although the amount of data scraped was manageable, the cleaning process was long and detailed. I found the Pandas package to be the most suitable for the cleaning process. To start, the ‘total assets’ column I scraped came as a string, denoting dollar amounts  both in billions (e.g. ‘$4.5B’) and millions (e.g. ‘$300M’). To deal with this, I first had to remove the ‘$’ by replacing it with nothing. Afterwards, to make the data consistent, I had to translate the rows denoted in billions to millions. I did this by first removing the ‘B’ and ‘M’ to turn the row into integers. Then, considering the minimum total assets under management was no less than $100 million, I used boolean operators to multiply all rows less ‘99’ by 1,000.  This successfully translated all of my rows denoted in billions to millions.

One would assume that the best performing large growth funds – those with the best rankings – would have the luxury of charging a premium to its investors (mostly through management fees with contributes the most to the total expense fees) to participate in their superior performance. Yet, as indicated by the data, it turns out that the best-ranked funds actually, on average, charge less than worst ranked funds.

This data suggests a few things.  One: the data seems to support the mostly-accepted phenomena that funds, on average, can’t consistently outperform the indexes. Consequently, it is often the best interest of investors to invest in funds with lower expense ratios since performance among funds will be more or less the same. Two: the data also seems to confirm the  postulate that  more turnover in positions doesn’t necessarily add to fund performance. Insofar as you can’t outperform the average fund in your category, additional turnover only adds to a fund’s expense ratio which, in turn, hurts the fund’s overall performance profile.

To inspect the extent of the impact of a fund’s total assets on its expenses, I decided to graph the relationship between fund rank and its total assets.  Since we know that lower rank means lower expense ratios and higher rank means higher expense ratios, we can use rank as a proxy of measuring a fund’s expenses. One would presume that funds with fewer assets under management would usually need to charge higher expense ratios than those with more assets under management due toeconomies of scale. Surprisingly though, based on this set of ranked funds, we see there isn’t a true relationship between totals assets under management and expenses ratio. This lack of correlation suggests that the variance in expense ratios among funds is more of a product of business model more than it is about fund size. That is, funds whose approach is based on higher turnover or more position dispersion may be the most dominant reason why there is variance in expense ratios among funds.

To further inspect the characteristics of the top-ranked funds, I created a boxplot and sideways bar graph to measure the fund’s rank in relation to its risk profile. Risk profile refers to a fund’s risk relative to the risk of the other funds in its category. For example, large growth funds that have an annual standard deviation of returns above 15% and a beta above 1.45% would be profiled as ‘High’ risk, whereas funds with a standard deviation below 12% and a beta below 1 will be considered below average.

It is worth remembering that the rank data is considered over a 1-year period. It is important to note this because the data suggests that perhaps the most risk-assuming funds are ranked the highest because the risk they assume has allowed these funds to capitalize on the aggressive bull market the most, and that explains their superior performance.

Conversely, it begs the question how well these top-ranked funds will perform during bear markets and more turbulent market times. Will these funds still be ranked the best? Will the high risk be detrimental to them during turbulent times? Is the premium investors pay in expense ratios for the safety that less risky large growth funds provide? I would need to scrape data through multiple economic cycles to truly answer these questions.

From the data I gathered, the large growth funds that have the lowest expense ratios are ranked higher than those with higher expense ratios. Thus, the performance of funds with higher expense ratios isn’t in any way measurably better than those with lower expense ratios. By looking at each fund’s total assets under management, we see that the variance in expense ratios among funds isn’t necessarily due to its size, but more so due to its strategy – the amount of turnover the fund assumes and its dispersion in positions. Lastly, the data shows that the highest-ranked funds are those that have the highest risk profile. By assuming more risk, the highest-ranked funds capitalize on the momentum of the bull market while still limiting their expenses.

3)      Aggregate the data of each fund family and compare them to each other to see which family characteristics are most prosperous.