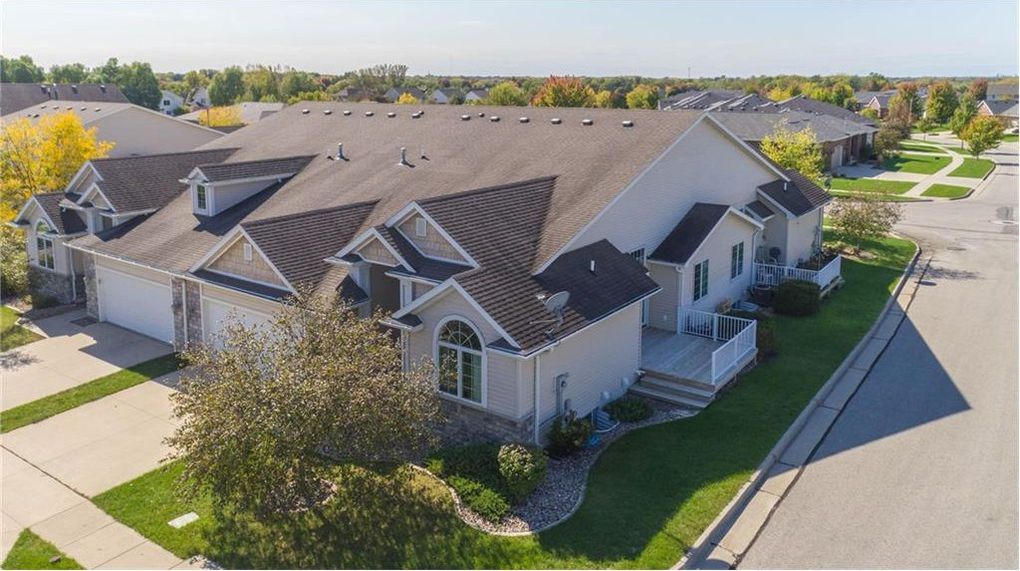 Buying a house in today’s economy is an expensive proposition. As millennials flee the housing market in search of more affordable living options, realtors and corporations are scrambling to find ways to make properties on the market attractive to what buyers are left. Being able to predict what the housing prices in a particular market might look like in 10 or 20 years would be a particularly valuable practice in this endeavor.

Cue Notorious B.I.Ggplot (Angie Lin, Chris Castano, and Kat Kennovin)! Our group used the dataset listed on the Ames, Iowa, housing data Kaggle competition that was compiled by Dean De Cock to see if we could successfully predict the prices of houses for which we had no sale price.

Provided here is a link to the Github repository for a further detailed review into the code used:

Our team decided early on in our process that we wanted to use a tree model to predict the sales prices. However, before we could get started training our model, we needed to deal with the missing values in our dataset. The most common form of “missingness” was the inclusion of the value “NA” in the dataset. This usually means that a value was not recorded. However, the notes for the dataset revealed that this value often denoted instances where there was no relevant information, rather than a value that had been left out of the dataset. For example, if there was a value of “NA” for the variable which recorded the basement area, it meant the house did not have a basement rather than the basement area had not been properly recorded. However, when reading a CSV file into Python, it is set by default to interpret the string “NA” as a true Null value which will interfere with our analysis and prediction models. To rectify this, we filled in a value of 0 where appropriate for numerical variables and values such as “NoBasement” or “NoGarage” where appropriate for categorical variables.

We dummified certain ordinal variables to see if we could extract further information from the values within. For example, “LandSlope” was originally indicated with categories “gentle”, “moderate”, and “steep.” This could be changed to rank the severity of the slope with nominal values, like 0, 1, 2, where 2 is the steepest rank.

We dropped two variables: “PoolQC” and “MiscFeature”, which meant Pool Quality and Miscellaneous Feature respectively. There were so many missing values (each more than 1400 missing values out of 1460 total observations) that we thought if we imputed our own, it would be us telling the dataset about itself, and the not the dataset telling us about itself.

We added several variables to the dataset to see if we could increase the accuracy of our model. Some of them were quantitative variables that made looking at the data easier. Some were categorical variables that we thought off the top of our heads might make a difference. For example, we thought it would be more likely that buyers would purchase homes in the summer since families do not want to move during a school year. We created a column called “seasonality” to take this trend into account, which gave each observation a named season based on which quarter of the year it fell into combined with the year sold (for example “Fall-1992”). On the quantitative side, we did things like adding together all the square footage-related columns in the dataset in order to get the total square footage of the home. Among the new variables we added were “Total Square Footage”, “Seasonality”, “Remodeled”, “New House”, and “Total Bathrooms”.

Finally, we added a variable consisting of an entirely random vector of numbers. When we analyzed feature importance of our tree models, we could then conclude any variables which performed worse than the random variable were not making a significant contribution to our model. These variables and the random integer variable were then dropped from the dataset.

After running an initial tree model to see where it is we were starting, our team immediately jumped into using random forests in order to get some information on feature importance. As previously mentioned, one of the variables added was “randInit”, which assigned each observation a random number. Any variables that had less importance than randInit were selected to be dropped from the dataset, as the variables are essentially “worse than random.” 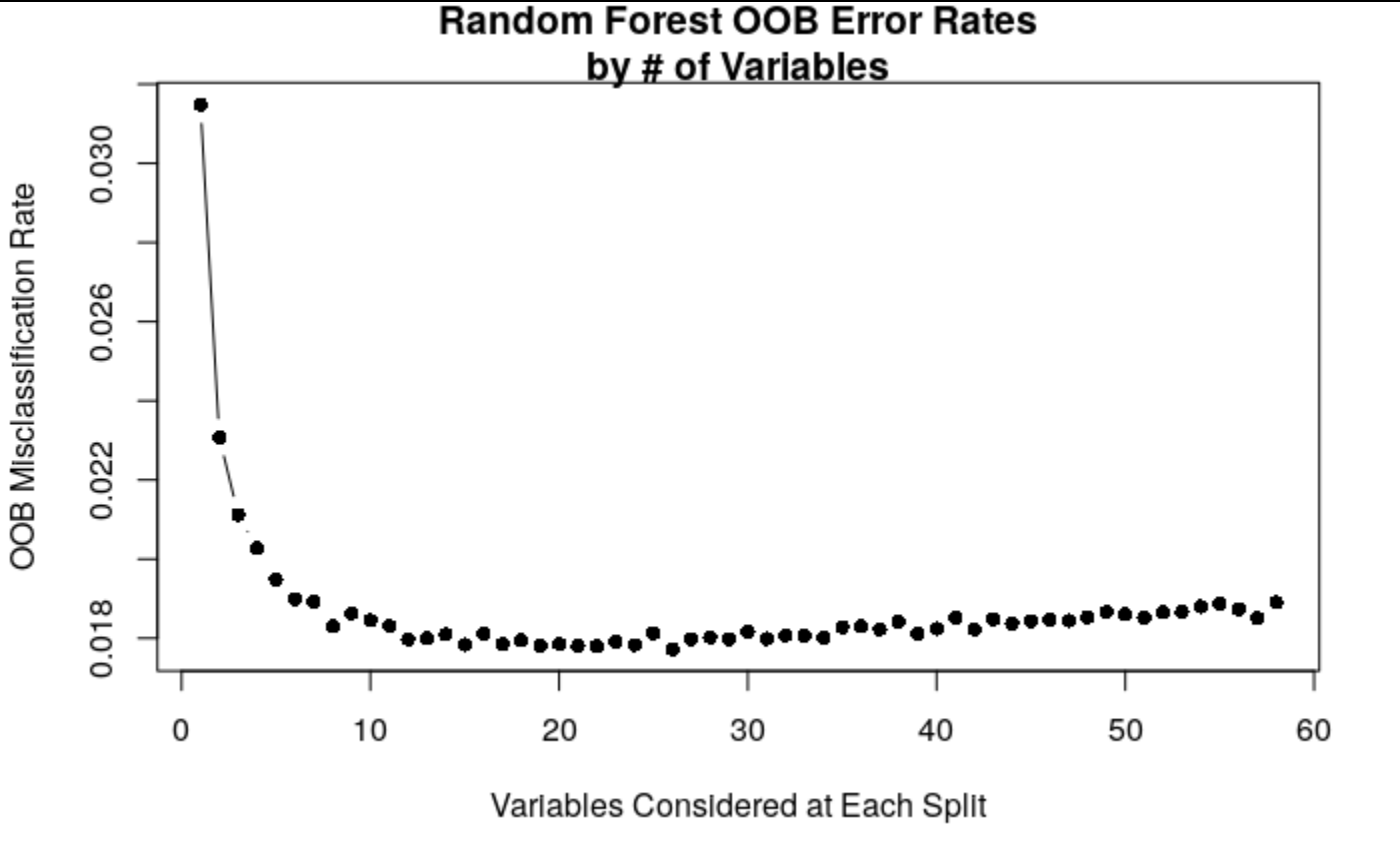 To further determine which variables should be kept, the data was split into a training and test set (80% - 20% divide respectively). We tested which subset of variables gave the lowest test MSE and used that model as the final model to tune and use for a boosted tree model.

We then used a boosted tree model to reduce our error even further. Here, our goal was to find which number of trees used in our model would give us the best MSE. 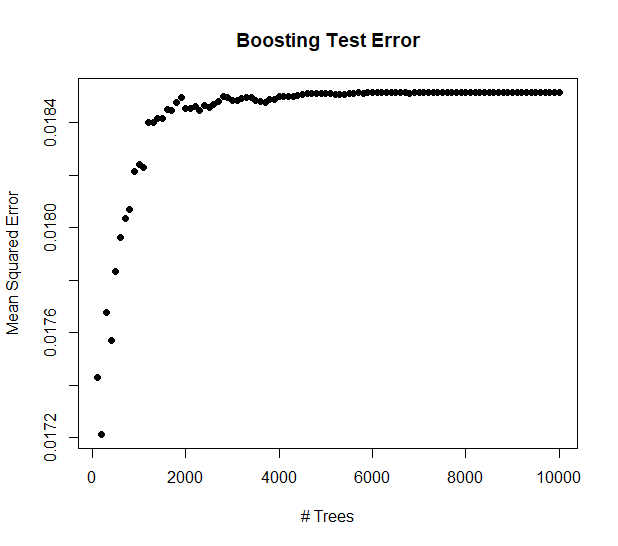 There are several areas in which our model could improve.

Given that the boosted model gave our team the best outcome, we would like to spend more time further tuning the hyperparameters other than number of trees used to see if they could give us an even better result. We could potentially tune interaction depth, minimum observations allowed per terminal node, and more.

In the future, we would also like to explore the possibility of stacking our models. Simply taking the average of the predictions from our final random forest model and final boosted trees model produced an RMSE marginally worse than our boosted trees RMSE. However, we think that combining the best predictions of both models would potentially lead to a better result.

After graduating with a B.A. in History and Journalism from Georgetown University, Chris went to work in the digital media industry as a producer for a video-driven news website called Circa. After having been handed loads of data...

Topics from this blog: Machine Learning