Global Life Expectancy Explorer: What happened when the floor dropped out?

Global Life Expectancy Explorer: What happened when the floor dropped out? 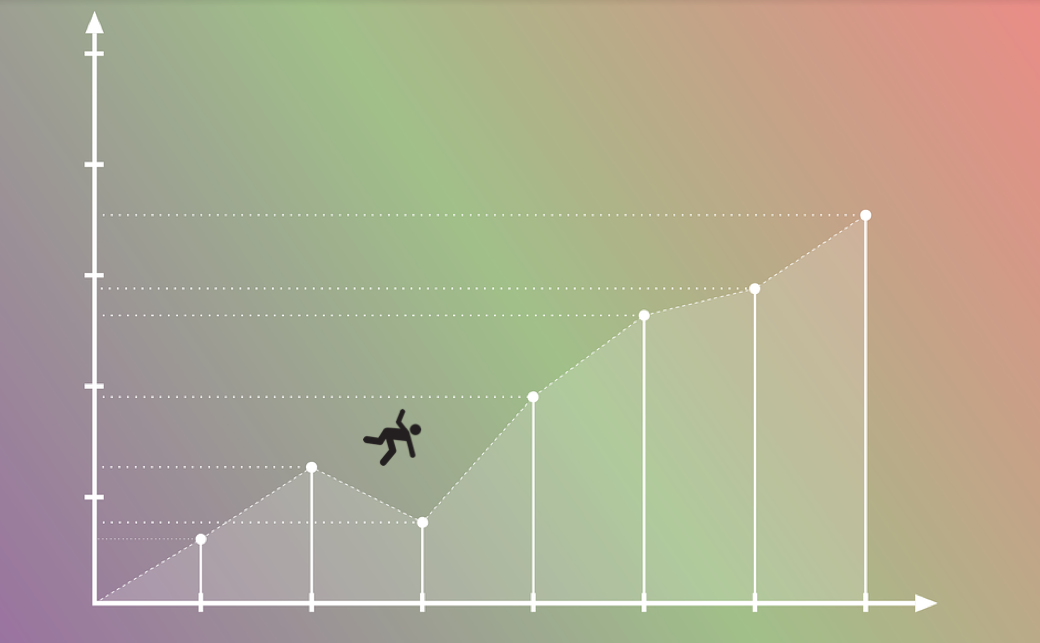 Robert Frost, one of the great American poets of the early twentieth century, once stated, "In three words I can sum up everything I've learned about life: it goes on." If we can take his observation and apply it to the average life expectancy of humans across the globe as a single group, we can say that life not only goes on, but, fortunately, also up. (see graph below)

But, alas, the devil is always in the details. That is where this first Shiny data science project leads me: an exploration into the not so rosy life expectancy data around the world.

Although there are numerous open data sets around the web, one of my favorites is The World Bank. Specifically for this endeavor, the HealthStats portal published via the World Bank Group. The data set provides female and male life expectancy information for 253 countries and covers a time range from 1960 through 2014. It's a substantial collection of data for my initial inquiries.

Every investigations needs at least one tool. Here we leverage Shiny to dive past the very general trend line of a global population and graph separate gender box plots of all countries to see if anything stands out.

Looking at the plots, it becomes immediately obvious that although the median trend of countries is positive, we have some serious outliers in the data. Overlaying the gender differences provides extra contrast. 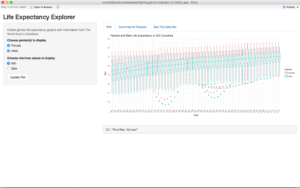 Why Did The Floor Drop Out?

The outliers show a significant drop in life expectancy. So what countries are causing these? Ideally, the Min/Max selection would already identify the data points and display them below the plot. It's a feature still in work, so we can make use of the tab panel that displays the raw data set. 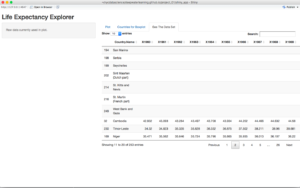 If we note the years of interest below the outliers from the box plot, we can locate the equivalent year/column in the data set. Sorting the year column in ascending order allows us to identify the countries with the minimal life expectancy numbers. Filtering individually on the top five countries in the primary plot reveals the devil within the details. 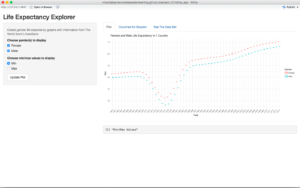 After searching the affected years in Cambodia, we find the following significant events: Cambodian Civil War (1970-1975), Khmer Rouge regime (1975-1979). The later event was well known as the "Khmer Rouge Killing Fields". 1 million+ people were killed during this period. 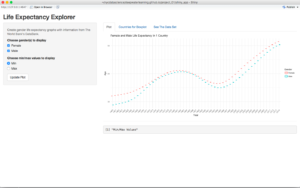 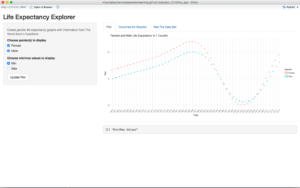 Zimbabwe primarily suffered from a devastated economy and massive food production shortages due to government actions during the affected years. 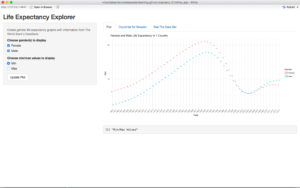 Health issues seem to be the main culprit affecting Swaziland. Tuberculosis, with HIV/AIDS being especially devastating (WHO data in 2002 shows that 64% of all deaths in the country were caused by this illness), contributed the lion share to mortality statistics.

An initial glimpse deeper into the data shows some periods of painful rot beneath the healthy global trend concerning life expectancy. Continued enhancement in the Shiny app will provide more efficient insights into the what/when/how of country data points. The following modifications should help with that goal: