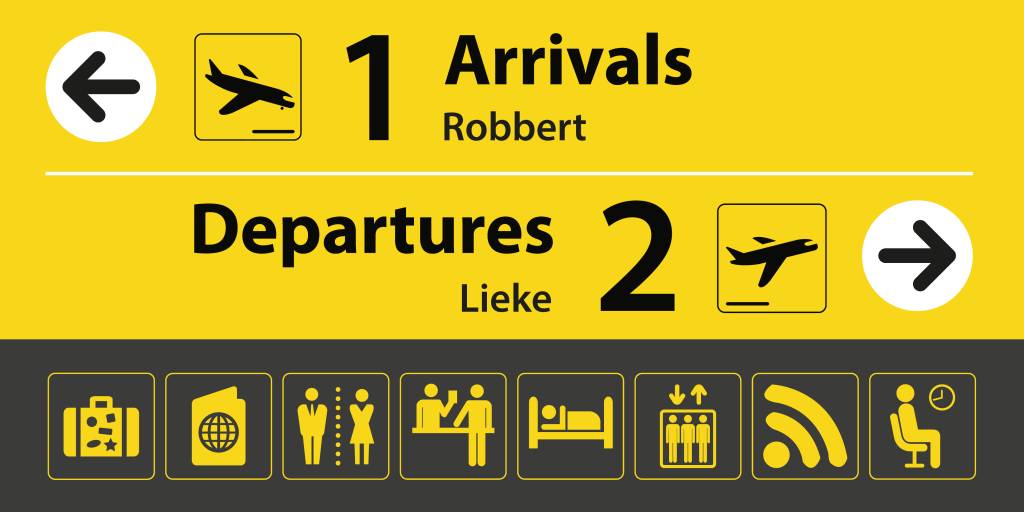 This project is linked to my last project which is "Visualisation of Us Domestic Flights in year 2009". According to the last project ,  there is a pattern of passengers movement from North to South in December  of 2009. However, it is hard to say weather it is a special case of year 2009 or it was a generic pattern for every year. Additionally, due to the lack of data on time scope, it is hard to see how air traffic and airport is changing through the year.

Thus, I decide to do further research by using the US domestic flights data from 1990 to 2009. The following are the initial questions that the report is going to figure out: how much percentage the air traffic is increasing during the 20 years. What is the trend of air traffic of US domestic flights from 1990 to 2009. How is the performance of  commercial airports vary by year and by month. Is there exist a common distinct pattern of passengers movement by month of each year. Moreover,  there  is a way to compare the airports performance by categorising the airports in to groups. So I wonder the differences between the different groups of airports.

The origin data set is over 3.5 million monthly domestic flight records from 1990 to 2009. Data are arranged as an adjacency list with metadata.

1.Pre-prepare for the data

In order to answer the questions in the introduction, I manipulate the origin dataset by adding the location (longitude and latitude) of each airport. I also add the information of state for each airport. Moreover, according to the FAA(United States Federal Aviation Administration)principle of categorising the airport,  most of the airfields that qualify for funding are commercial service airports , which are more dependent on regularly scheduled commercial airline traffic.There are two subcategories under the commercial service airport:  primary airports and non primary airports, which is base on weather the airport is handling more than 10,000 passengers each year. In regard of this,  I grouped the data by year and airport and then filter the total passengers that over 10,000, thus I only keep for the primary airports. After that, I categorised the each primary airport by following the FAA principles on Primary Airports:

Finally, the data set for analysing is done (RawCode for data manipulate) and below is the snippet of the data:

2. Create the Shiny app by using the data above.

All my analysis is based on the dataset above and I use this data to create a shiny app for users to check my analysis and could research by themselves , if they feel more interested in other aspects which I may did not cover in my analysis. Here is the link for connected to my shinyApp .  All the raw code of creating shiny app could be found by here :RawCode of ShinyApp

During the 20 years, the number of total domestic flights in US have increased by approximately 35% , while the quantity of Passengers have increased by around 42%. However, the quantity of flights and passengers both plunge during the year 2000 to 2002  and the year 2007 to 2009. The quantity dropped by 9% in passengers and  10% in flights during the period of 2007 to 2009. The reason maybe because of 911 attacks  happened on 2001 and financial crisis of year 2008. 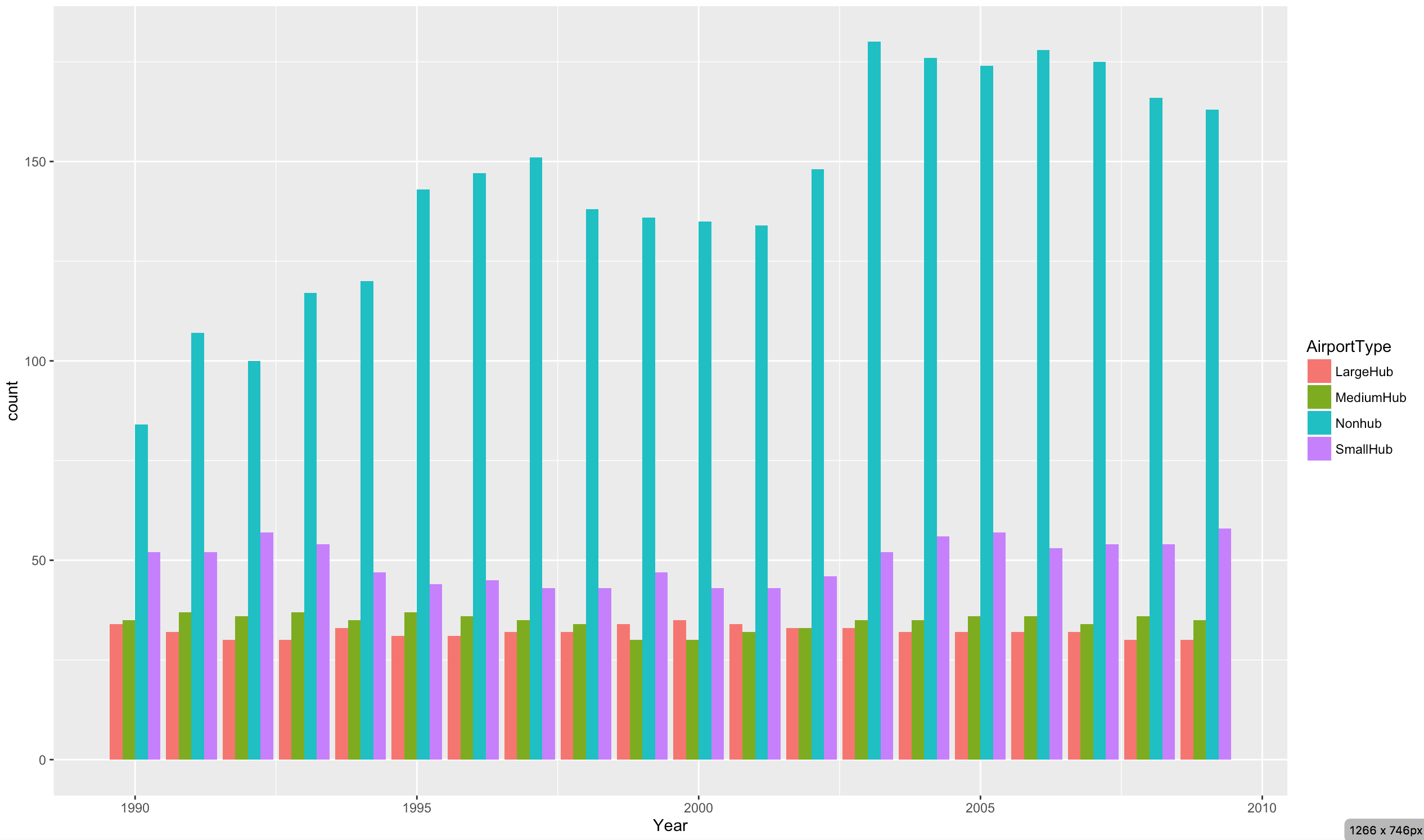 There are four groups of primary airports : N0nhub, SmallHub,MediumHub and LargeHub. From the above bar chart , we can see only the number of  N0nhub airport type increased a lot since 1990. Until 2009, there is 163 NonHub airport, which is approximately double the number of NunHub in 1990.The variation of other airport type during the 20 years is not that obvious.

A interesting thing is some of the airport underwent the change of Airport Type by year. Here is the some interesting findings from the shiny app. 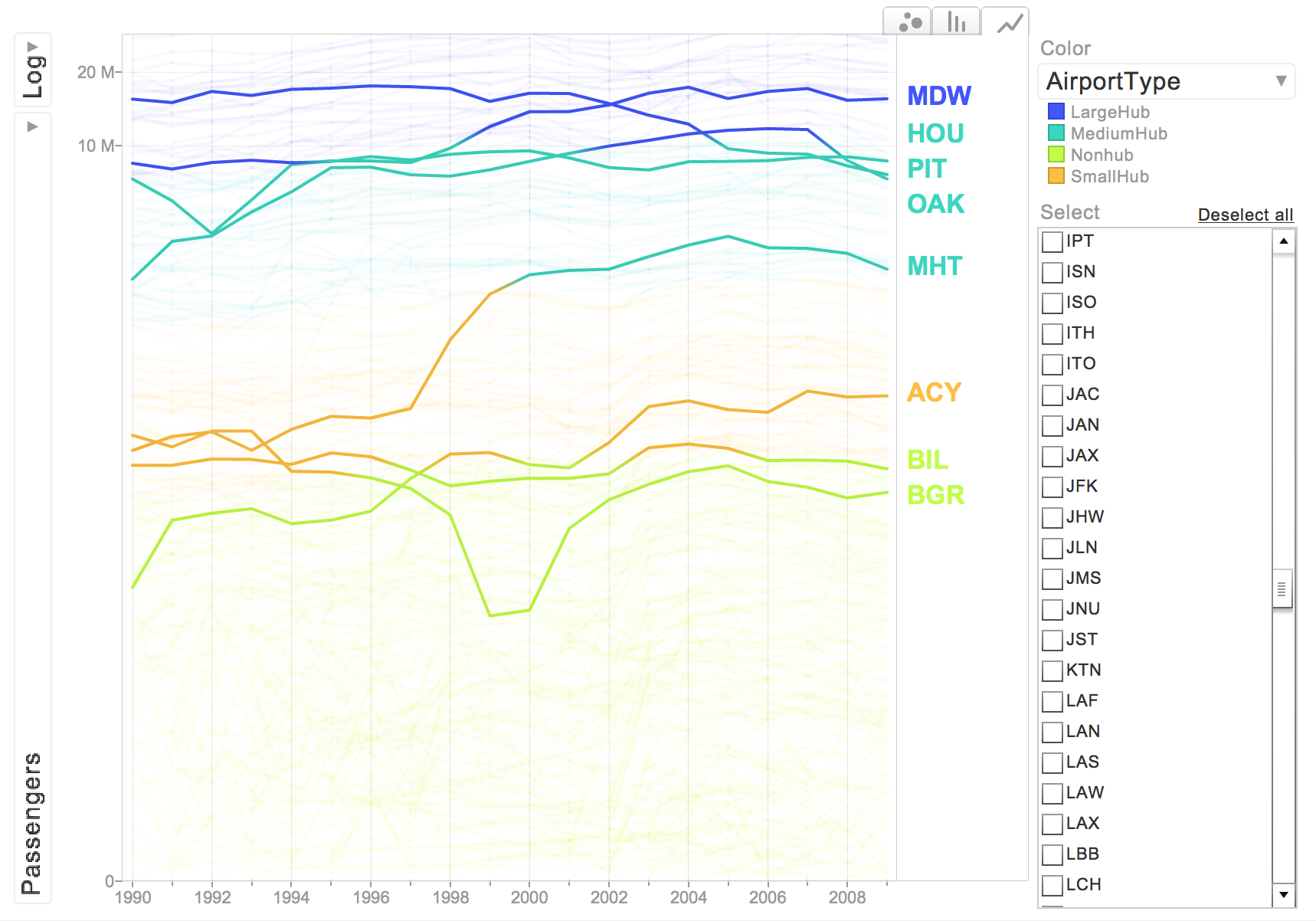 The airport MDW is a MediumHub during the 1990 to 1998 and then became a LargeHub after 1998, while MHT airport became a MediumHub after year 1998.

However, it is better to plot the flights number and occupancy level together to check how well the occupancy is for each airport. 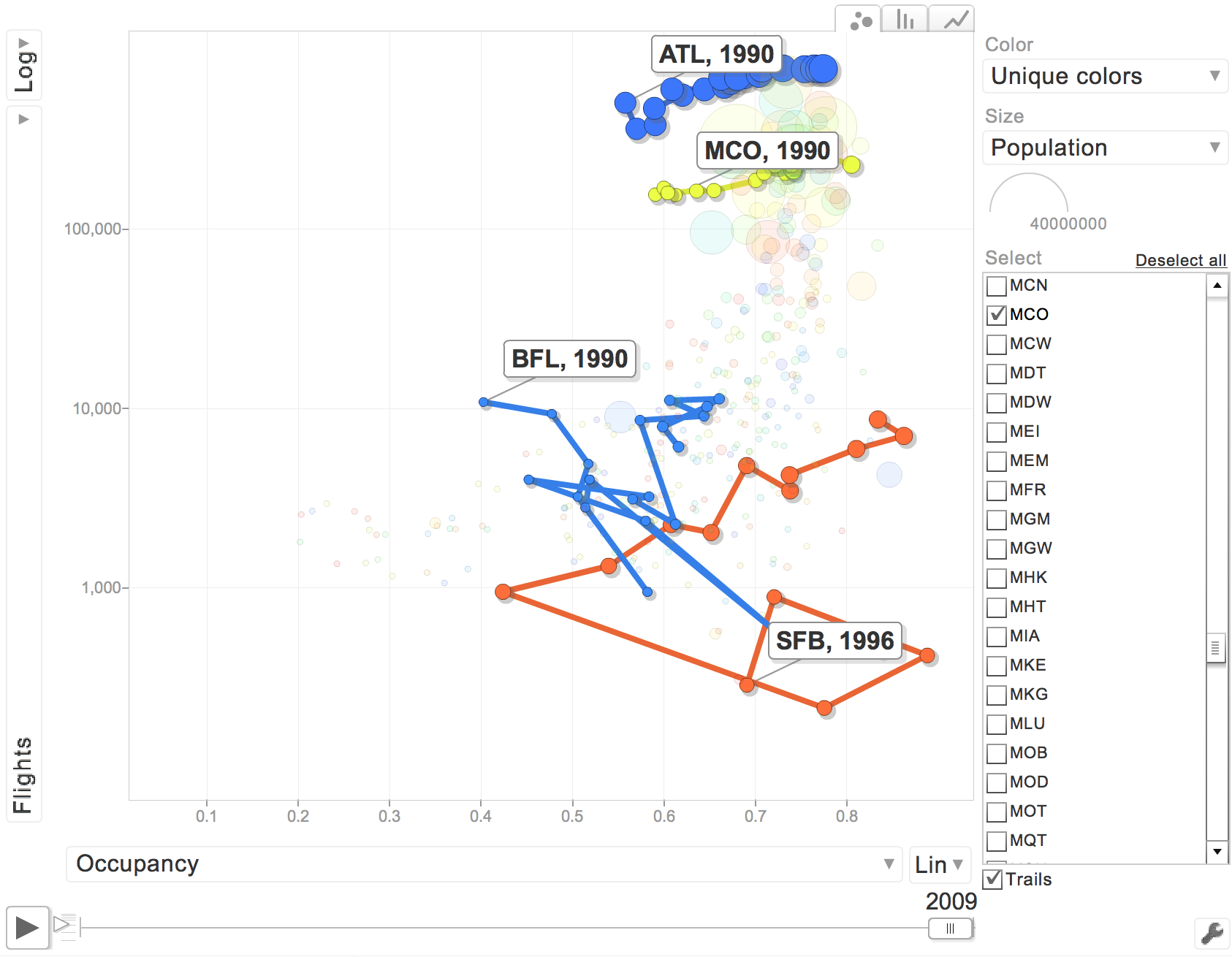 The above graph is from motion chart yearly tab, and select flights Vs Occupancy. I find out that ATL and MCO airport are occupancy rate and flights are positive related, which is normal. However, SFB and BFL occupancy is not that good. For SFB, we can see that the flights number was increasing  a lot from 1999 to 2000 , however the occupancy rate is decreasing by 45%, which means the SFB airport during the period of 1999 to 2000, the number of flights increased while occupancy level decreased. Thus, the SFB airport at that time is not that efficient, although the flights number was increasing a lot. 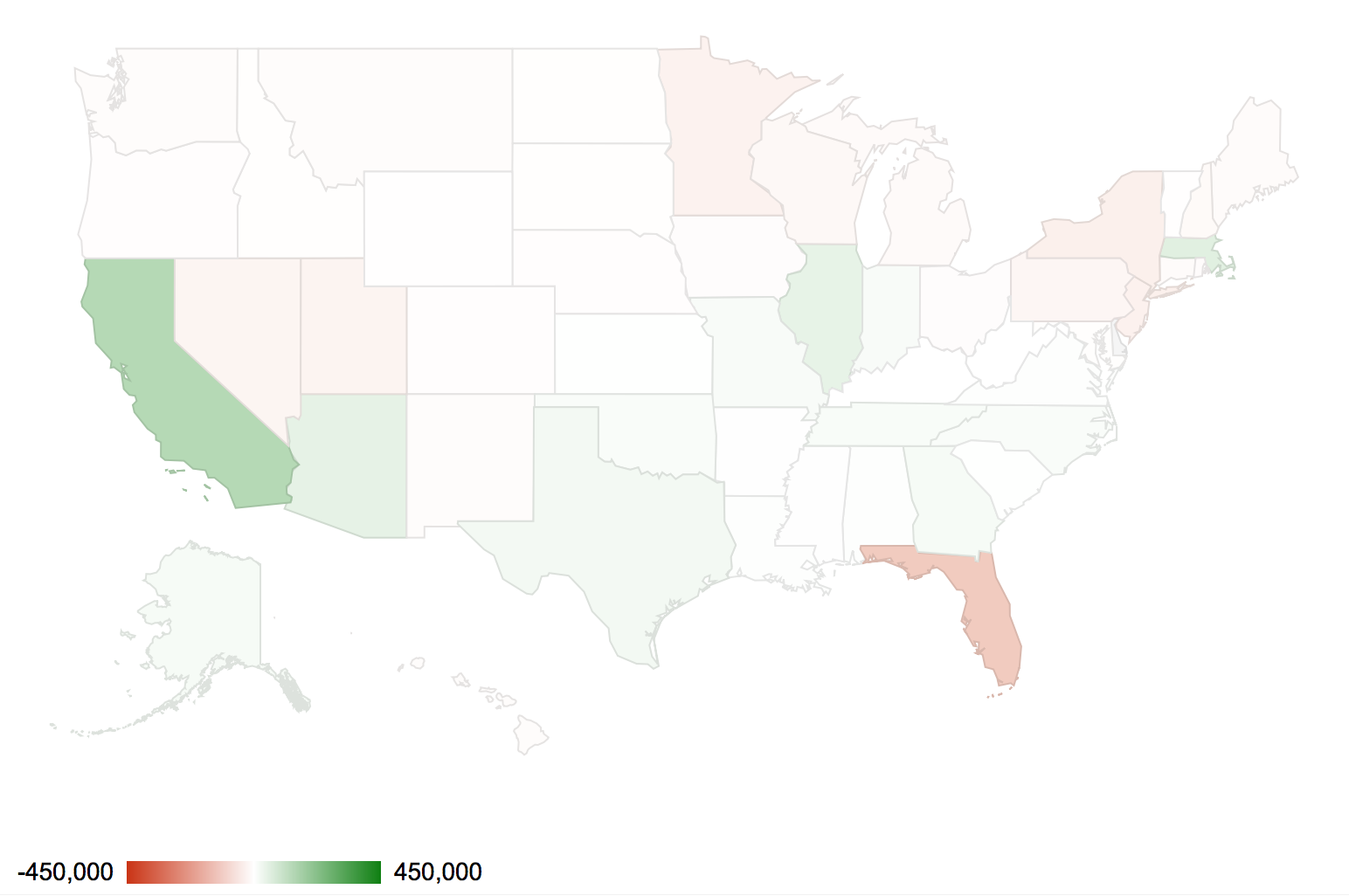 The interesting finding from the motion map in the ShinyApp,  there is a common pattern of passengers movement during  the end of the year(December) to the beginning of the next year ( January ), there is always more people went out from north part of US to south area of US at the end of the year , especially went to the Florida , the Southeast State in the US. While, there is more people leave from South part of US , e.g. Florida State,  to the North of US. In other words, the distinct pattern found in year 2009 is not the special case of that year. The reason should be the winter holiday( Christmas)  and weather at that time, so the passengers are prefer  traveling to south part of US by using the christmas holiday.

Another factor should be raise , when change the year and month , the North West area of US always have the very light colour. This phenomenon maybe account for the geography and population of the state.

Welcome to view the ShinyApp to check my analysis.

All the Raw Code is available to check here:

Yunrou Gong worked as a Business Analyst for Sanity Lighting Co., a LED Manufacturer. Through her work as an analyst, she accumulated her interest in data-driven approach of problem solving. She holds a M.S. in Operational Research, specializing in data analysis from University of Manchester, where she completed her thesis in “Dynamic Modeling of Closed Loop Supply Chain”, and a B.S. Honor in Business Finance from University of Sussex in UK. Recently, she moved to New York and join the data camp in NYC Academy to enhance her programming and data hacking skills, focusing on applied statistics and machine learning knowledge to interesting real world problems.