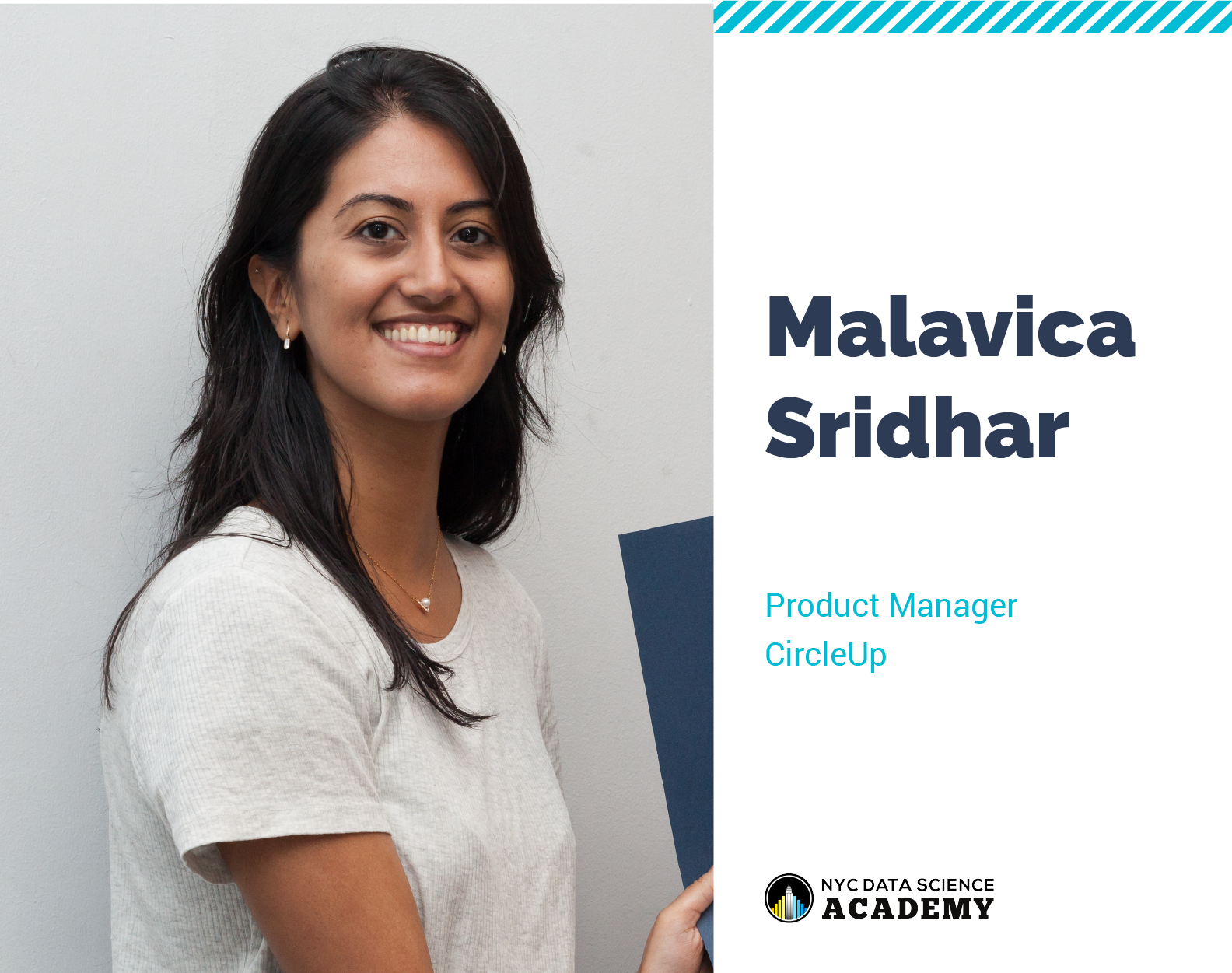 Malavica Sridhar is currently a Product Manager at CircleUp, a job that lets her use both her business skills and the skills she acquired at NYC Data Science Academy. She chose to work at this firm rather than at the bigger names that offered her a position -- like Google, McKinsey, Dropbox, Airbnb, and Facebook -- because she felt that she could have a greater impact at a smaller place.

Malavica’s decision to attend NYC Data Science Academy was based on her general approach to decisions: she thinks about where she wants to end up and works backwards from there. She wanted to acquire a breadth of data science knowledge to qualify for a career in which she has a real impact on the direction of the business.

As Malavica tells it, her work experience before enrolling in bootcamp was “sort of all over the place.” Her most recent job before enrolling was as a Business analyst for McKinsey & Company where she did advanced analytics and strategic work for a variety of clients, primarily in the banking space. Before that she worked in customer business development for Procter and Gamble, following a stint at a startup called Custora that uses predictive analytics to provide customer insights to retail industry customers.

Malavica holds Bachelor’s degrees in both Business Administration (in Marketing and Strategy) and Statistics from the University of Michigan. Her experience was an important factor in the decision to attend NYC Data Science Academy’s bootcamp, as she knew that she would need a program that was open to students with only an undergraduate degree. Next, Malavica  “started working backwards,”. She began thinking about what she wanted to do and what she’d have to learn to get there.

For Malavica, research included talking to people who had graduated from NYC Data Science Academy.  She found that they weren’t only data scientists but also people who followed somewhat different career paths. She wanted a program that would prepare her for any career direction she chose, whether this be as a data scientist or as a product manager.

One thing that made NYC Data Science Academy really stand out is that it would enable Malavica to learn data visualization and two languages -- R and Python. In contrast, other programs only taught a single language. The breadth of the course work and the acquisition of those two languages gave her not just the ability but the flexibility to embark on different career paths.

She also found that she learned a lot both from the staff and the student body. In her bootcamp cohort, students were evenly split between those who held a Master’s and those who had a Bachelor’s degree, in addition to eight students with PhDs.

The benefit of having cohort-mates from different levels and backgrounds is that they brought different things to the table. Those with coding experience from different languages were able to pass on “tricks of the trade” from what they knew that others may not have been exposed to, Malavica observed. She also found it beneficial to connect with people who approach code the same we she does, even if they had different programming training.

As some students had stronger coding backgrounds than others, the school offered “pre-work” to give students the opportunity to get up to speed on technical skills that they would need to build on in the bootcamp. The material was helpfully tailored to the needs of the student.  In her case, Malavica applied her “working backwards” approach to planning and set aside six weeks prepare for the bootcamp.

She explained that there are a great number of topics that the program runs through rapidly. That leaves students with two options: either they can aim to cover it all in a short amount of time, or they can think about what they want to specialize in and focus only on those areas.

Her own approach, and the one she recommends to others is to give a great deal of thought to where they “want to end up and then work backwards.” For example, someone whose goal is to gain the expertise necessary to work in machine learning could focus on Python. In her case, she wanted to pick up a broader perspective and gain a general “umbrella of knowledge of all of these topics.” This allowed Malavica to be comfortable discussing any topic in a job interview, allowing her to keep her career options open.

Though she received several attractive job offers from major companies upon completing the bootcamp, Malavica opted to take on a bigger role in a smaller place.  At CircleUp, her position is to define and scale their machine learning platform, Helio. Malavica explains that though she doesn’t work as a data scientist, she draws on her data science skills to serve as a “bridge” between technology and the business teams. As such, she plans out what models need to be built and how the work should be arranged to drive effective execution.