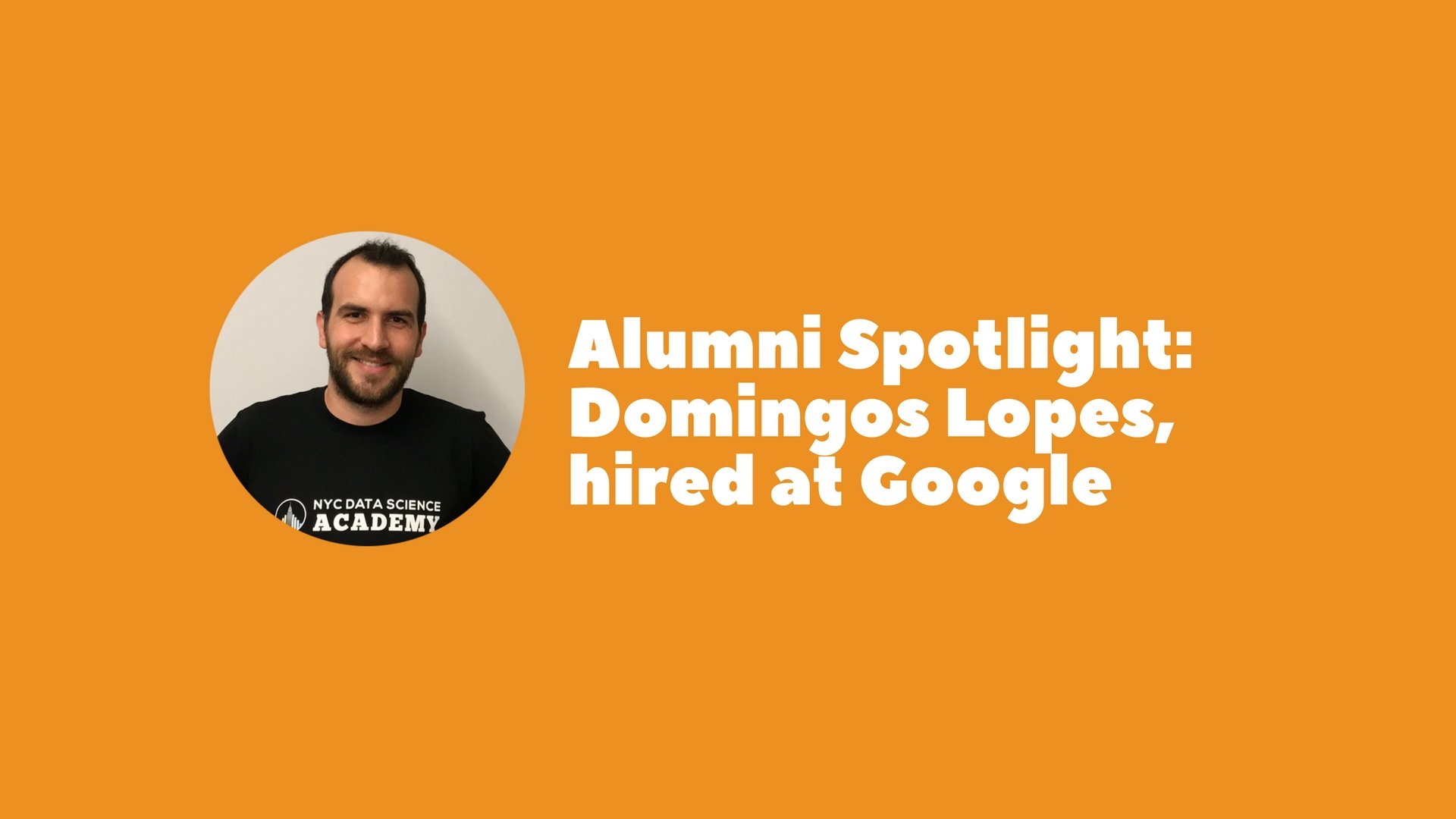 Domingos Lopes is about to begin a new job involving machine learning at Google after having completed the NYC Data Science Academy 12-Week Data Science Bootcamp. He came in with a strong math background, having earned a PhD in that field from NYU in 2016. After deciding that he did not want his job prospects to be limited to academic settings, Lopes decided that the best course of action was to acquire data science skills. In addition to the technical skills like Python fluency, he expects to draw on the ability to communicate data insight and work effectively in a team setting as he embarks on his career at Google.

You already have a PhD in mathematics and have over seven years of experience as a teaching assistant. Can you talk a bit about your background?

During high school I concentrated on Computer Science, but since then my major has always been mathematics. More than the beauty of it, what drew me towards it was the type of challenges that math research presented. After completing my undergraduate and master studies in Portugal, I came to NYU for my PhD, specializing in Partial Differential Equations.

What inspired you to pursue data science and sign up for the bootcamp at NYC Data Science Academy?

Having decided that I was going to pursue a career outside academia, at least in the few years following my PhD, and coming from a pure math specialization, there was going to be a gap that I had to bridge. I had a very limited experience with data science, having done some online courses. However, that would get me an internship at best, and I'd end up not with many choices. For that reason, I chose to join a data science bootcamp.

Did you look into more than one option for your data science education?

I was certainly familiar with other programs offered in the city, having checked them out in the past, although I didn't do any extensive research on other potential options at the time I decided to join.

Which particular feature of NYC Data Science Academy made it the best choice for furthering your education to fit your career plans?

There are essentially three factors that were decisive:

How many students were in your cohort?

I was never bored enough to count the students, but I believe 37.

Did you encounter any other PhDs among the students? Do most hold an undergraduate or graduate level degree?

If my memory doesn't fail me, PhDs accounted for about 20% of the cohort. Among the remaining 80%, a majority had master’s degrees while a minority had a bachelor degree

Aside from educational backgrounds, did you see a mix of race, ethnicity, etc. represented there?

It was certainly a very diverse crowd that, besides Americans, was mostly composed of Chinese, Indian and European people.

Can you describe the teaching style you encountered at NYC Data Science Academy?

Did you find it similar to or different than the teaching style you experienced at the university as both a student and a teaching assistant?

Coming from a pure math background, it's hard to make a comparison, as for many years the focus was much more on the theory and proofs and less so on the applications. Except for a few cases, the classes at the NYC Data Science Academy are mostly focused on the application, while the theory side of things is covered at a more superficial level that intends to be more intuitive and accessible for people with very diverse backgrounds. Classes are always taught with slides, having a lab component towards the end.

Were there things you didn't expect, or that you would have changed?

I didn't expect that I'd be meeting so many interesting people as, for most of my recent social life, I interacted almost exclusively with mathematicians.

Did you have a particularly challenging or enjoyable project to work on?

I think every project presented its own challenges, being either how to deal with the amount of data, how to find the right predictive models, or even how to manage work between teammates. I'd highlight as enjoyable having teammates very eager to learn new topics, useful for our projects, that weren't covered in class. As challenging, the nature of my capstone project of predicting the author of paintings.

You do have a job offer from Google in hand now, can you tell us about it?

Does it fit with what you envisioned as your ideal position?

Working for Google has been a desire I've had for a few years now, given the nature of the problems they work on, as well as for arguably being the best place to work. I'll be working on a team that does a lot of machine learning, which is a very hot and valuable field, and fits well with my mathematical background and passion for coding. As such, I see it as an ideal position, certainly so at an entry level.

Which skills taught at NYC Data Science Academy do you expect to be drawing on in your job?

Given that I'll be working on machine learning, I believe most of the machine learning topics we learned at the NYC Data Science Academy will be useful in this job. Other useful skills I acquired during the boot camp, that would certainly be helpful, are an improved Python fluency, communicating data insights and the ability to work in teams.

The first step in becoming a data scientist is to complete your Data Science Bootcamp Application.  Just click the button to apply.  It's free and will only take you about 5 minutes.